Wyatt is the oldest child of Piper and Leo.

Wyatt Halliwell must have been born under a lucky star. His birth fullfilled a prophesy about magic stopping to greet a twice-blessed child. He's also the heir to Excalibur. Not bad for someone who, as the child of a witch and a whitelighter, wasn't supposed to exist. When he was less than a year old, his younger brother, Chris, travelled back in time to prevent events that would have turned Wyatt evil. When they were alone, it was clear to Wyatt that he couldn't trust this dark stranger who vowed to stop him if he couldn't save him. Despite the lack of trust, Chris eventually gave his life for him, something Wyatt was too young to really remember or understand.

As Wyatt grew older, he proved to be a very quiet child, at one point not talking to anyone other than Vicus, a demon who befriended him in hopes of turning him evil. He was also a mischievous child, sometimes orbing his brother upstairs or even to Grandpa's house so that he could be the center of attention.

"The line continues with their offspring, beginning with Piper's sons, Wyatt and Chris, who have journeyed from the future on occasion to help the current generation."

Wyatt and his little brother, Chris, entered the kitchen to find their mom and baby sister being suspended in the air by vines. Piper asked the two boys to help. It is uncertain in what form this help took other than that Piper and Melinda did get out of the vines. The boys may have used their own magic to get the two free or they may have gone for the help of someone else.

Wyatt, along with his siblings and cousins, stayed with his dad while his mom and Aunt Phoebe went to a funeral and Aunt Paige went to meet her new charge. The plan was for them to go to Magic School.

Wyatt goes with his mom, Piper, and Uncle Coop to get Excalibur out of it's rock so that they can use it on the Source.

It is revealed that Wyatt isn't the only one who's twice-blessed. Both his little brother and his baby sister, Melinda, are also twice-blessed.

Wyatt's cousins come over for a sleepover while the adults work on a solution to get back his mom and his Aunt﻿ Paige. When his grandpa, Victor Bennett, arrives, he watches over the sleeping children.

When Paige and Prue met and caused the powers of everyone in their family to mess up, Wyatt used his powers to conjure another dragon. It is unknown where this one came from, since dragons are extinct and the last one came out of the television.

Wyatt, along with his siblings, and cousins are in Cupid's Temple. As his parents talk about the upcoming fight, Wyatt races his siblings across the room.

Wyatt goes to an arcade with his parents and siblings. He is concerned about his mom, but Leo waves away his concerns.

The Heir Up There
Flashback 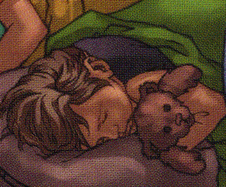 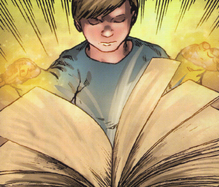 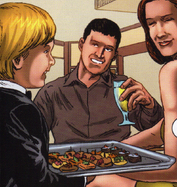 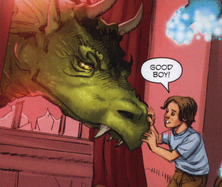 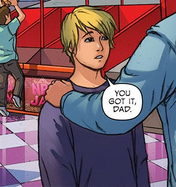 Love Is a Burning Thing
Add a photo to this gallery
﻿

Pat Shand said that Wyatt was seven at the time of Charmed Assault.

Retrieved from "https://thecharmedcomics.fandom.com/wiki/Wyatt_Halliwell?oldid=13768"
Community content is available under CC-BY-SA unless otherwise noted.