Since their third child was mentioned in "Forever Charmed" it is assumed that this is the same child, a third daughter, which Piper claims she also saw in a vision. The first initial is also assumed since Phoebe told Prue that she had decided to continue the tradition of using the letter "P" to start names and both P.J. and Parker have names starting with "P".

As a result of being around Prue, Piper is seeing an ever changing future. In one of those futures, she saw Phoebe having a third little girl.

She is a newborn, so she hasn't said anything. 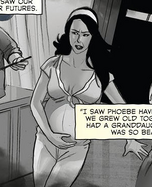 Add a photo to this gallery
Retrieved from "https://thecharmedcomics.fandom.com/wiki/Peyton_Halliwell?oldid=13898"
Community content is available under CC-BY-SA unless otherwise noted.