Parker Halliwell is Phoebe and Coop's second child. She was born in The Old Witcheroo.

Since their second child was seen in "Forever Charmed" it is assumed that this is the same child, a second daughter. The first initial is also assumed since Phoebe told Prue that she had decided to continue the tradition of using the letter "P" to start names.

Cole told his ex-wife, Phoebe, that she and her new husband were expecting their second child.

Phoebe told Paige that her baby protested Paige's use of magic on the Mercers, but Paige decided that was just gas since Phoebe was only three months along.

Parker is born in the manor like her mother and cousin, Wyatt, before her. The world in which she is born is quite different from the one the rest of her family was used to.

Phoebe carries Parker from the manor to an alley where they get trapped by warring magical factions. Coop finds themmm and carries Parker the rest of the way to their destination, Knox Academy. Once there she is handed off to Elise who her parents trust to get Parker to safety. Parker is three weeks old.

No Country for Old Ones

Coop changes Parker's diaper while Leo talks to Piper on the phone.

She hasn't said anything. 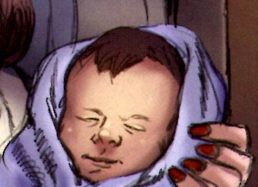 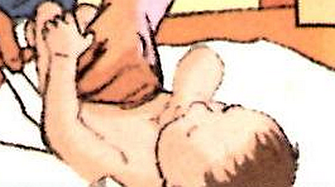 No Country for Old Ones
Add a photo to this gallery

Pat Shand said that Parker was about one at the time of Charmed Assault.

Retrieved from "https://thecharmedcomics.fandom.com/wiki/Parker_Halliwell?oldid=13787"
Community content is available under CC-BY-SA unless otherwise noted.