Oh, Henry is issue #8. It is also the second issue in the second story arc.

An Innocent homeless teen in San Francisco falls victim to a stray arrow during the Darklighter's attack on a Whitelighter. The pregnant teen is dead, but Paige manages to save the girl's baby by orbing the child out of the body immediately. Neena finally reveals herself to the Charmed Ones while taking on an Elder directly on the streets of San Francisco. During the battle, Neena sends Piper into the void that she sent the Angel of Destiny in Charmed Lives. Phoebe and Paige want to stay to fight the stranger and rescue their sister, but Leo forces them to flee.

Piper and Phoebe are trying to ward off an attack from Rennek and a demon of some sort while Paige is checking on one of the two victims. Presumably they already know that the whitelighter is dead. Paige determines that the girl is dead, but she realizes the girl’s unborn baby is still alive. As Piper throws some sort of potion bottle at the demon, vanquishing it, Paige orbs the baby out of the girls stomach and thankfully it works. The baby boy is all right. Rennek takes the opportunity to use some sort of vial to get bubbles out of the dead whitelighter, probably a representation of the whitelighter’s powers, and black orbs out, having gotten what he came for. Paige returns to her sisters and introduces them to the newborn. She tells them she will go see her old boss, Bob Cowan, and ask for his help in dealing with the newborn.

Later after having gone to see Mr. Cowan, Paige has brought home the little boy and he’s sound asleep between Kat and Tam. Henry is expressing worry over keeping the boy there to which Paige protests that “Isn’t this the reason we signed up to be foster parents in the first place?” Henry tells her that was before their wonderful but unexpected bundles of joy. When asked what they will do if Bob can’t find the girl’s family, Paige says “Then we’ll do what we have to for Little Henry.” Apparently, she named him without letting her husband know. Henry goes on about not being able to afford another kid and Paige presses feeling that this isn’t the big thing bothering him. Henry admits to being worried about the darklighter coming after Paige and the girls, though Paige isn’t worried, especially since the girls haven’t even come into their powers. Henry isn’t convinced and Paige cracks a joke, trying to defuse the situation. She does mention feeling guilty that she couldn’t save “Little Henry’s” mother and that she couldn’t save Brent a few months back and explains that stuff like this is why she helps out at Magic School.

Rennek returns to Neena and in response to Rennek telling her he didn’t engage the Charmed Ones, she makes a curious comment. “I wanted to keep them out of this. Wouldn’t left them out of it entirely if I didn’t need to divide the Source’s power to make my army strong enough.” Still whatever he plan is, Rennek clearly knows it and clearly doesn’t object. He does, however, distrust her, and he confirms that she did indeed kill Hogan (if there was any doubt). Rennek points out that the demons are going to figure this whole thing out eventually, but Neena isn’t worried. It won’t be soon enough. Neena is ready to start the next phase of the plan.

Meanwhile Paige is trying to find out what’s been bugging Henry. She points out that he’s been distant for months, which he denies, but when she points out that he’s pulled away from her and stopped holding the girls as much, he admits that he’s afraid . . . of everything. He’s quick to assure her that he loves both her and the girls, but it worries him that he feels so powerless. And he’s afraid of bringing up a mortal child in this environment if they don’t find the girl’s family. That’s when Piper calls and tells Paige to turn on the tv. On the tv there is a report of fog surrounding the Golden Gate Bridge and closing it off because of falling debris. Piper asserts that they need to get there as soon as possible and Leo will meet them there. Paige says good-bye to Henry and goes off to get her sisters.

When they arrive at the bridge they find a battle going on between the elders (three are seen) and Neena’s group. The sisters decide to go after Neena first since she’s clearly in charge. A demon comes at them and they duck for cover. Neena grabs Kyle and has Rennek shoot Kyle with his bow. Orb things exit Kyle, probably his powers. The sisters reach Neena as she’s holding a limp Kyle by the robe. Clearly both she and the robe are strong. Neena greets them and then says good bye, using the powers she used in the first episode to shove them back. Paige orbs out as her sisters fall. Piper falls right into one of Neena’s portals. Paige tries to orb Piper to her, but Phoebe tells her to orb them down so they can at least find Piper’s body. Down on the ground they find debris, but no Piper and then Leo arrives. He explains that he had trouble getting past the police who have blocked off the bridge. Paige and Phoebe start to explain when happened when they see Neena and point her out to Leo. Leo tells them that they have to get out of there now and Paige orbs them to the manor where Leo explains that Neena wasn’t evil before now. “She’s a witch, just like you. Well, actually, that’s not true at all. She’s not just a witch. She’s the first witch.” 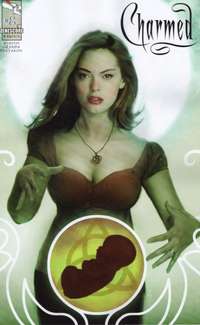 Cover A
Art By: David Seidman 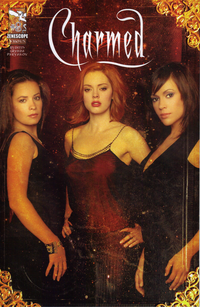 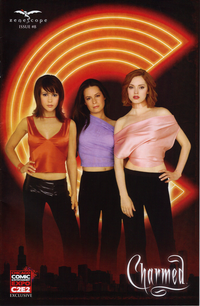 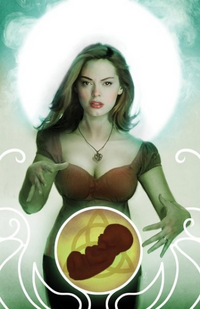 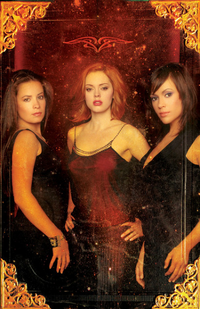 Preview Cover B
Photo Cover
Add a photo to this gallery 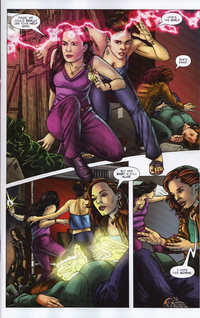 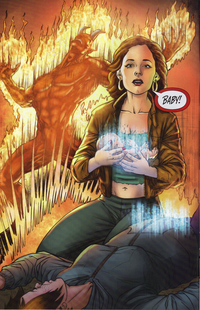 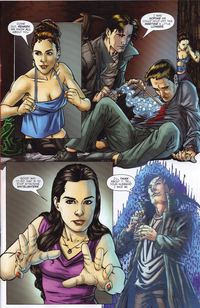 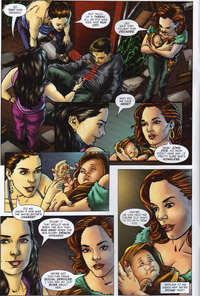 Page 4
Add a photo to this gallery 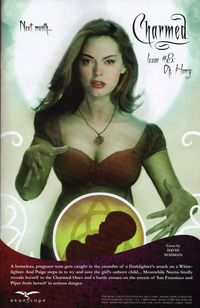 Ad in the back of The Heir Up There
Add a photo to this gallery
Retrieved from "https://thecharmedcomics.fandom.com/wiki/Oh,_Henry?oldid=13777"
Community content is available under CC-BY-SA unless otherwise noted.