Mitchell Coopersmith is a distant relative of Coop's. He could possibly be the decendant of a sibling of Coop's. He has one known sibling of his own, a brother who under the influence of the cupid magic gone awry hit on Mitchell's future mother-in-law, something Mitchell seemed to think was worth commenting on the fact that it was weird.

Mitchell asked for someone to help him get the cake out of his car saying it would be suspicious to his fiancee, Bree Holcombe, if both he and the best man disappeared at the same time. Phoebe volunteered Coop to give her husband a chance to get to know one of his distant relatives. After Coop used his magic to give Mitchell a pep talk, Mitchell and seemingly the rest of his family were affected and started acting strange. His parents were fighting about the cake and his brother hit on Bree's mom. Mitchell's worry about Bree accepting his traditions were amplified. With some help from Phoebe, and Coop talking with Bree, they were able to work things out and he married Bree.

"How can I marry someone who doesn't appreciate my family traditions? I get that it's an ugly cake." - Cupid's Harrow 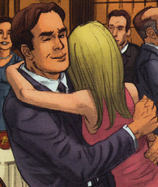 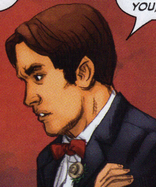 Cupid's Harrow
Add a photo to this gallery
Retrieved from "https://thecharmedcomics.fandom.com/wiki/Mitchell_Coopersmith?oldid=13721"
Community content is available under CC-BY-SA unless otherwise noted.