Agent Kyle Brody was a federal agent for Homeland Security who dated Paige for a brief while during season seven. He died at the hands of the Avatars.

When Kyle was a little boy, he watched his parents get killed by what appeared to be the Avatars. He spent almost the entire rest of his life trying to find and destroy them. He met the Charmed Ones just after the Avatars showed up wanting their help and started dating Paige. Paige tried to help him figure out the truth about what happened to his parents.

After the sister finally realized what the Avatars were actually up to, they got them to fix everything that had happened, since their so-called peaceful world was started, but Kyle's death happened before that, so he remained dead. The elders decided to make him a whitelighter as a thank you for trying to save their rears.

When Paige finds herself in a place between life and death, Kyle, who has not fully moved on yet, greets her and tells her she's not dead yet.

Kyle helps Paige reunite with her sisters and then, with his fellow elders, helps with the battle against Neena. Once the battle is over, Kyle says good-bye to Paige one more time. It's time for him to finish moving on. 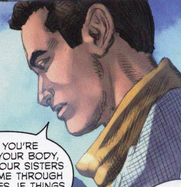 The Charmed Offensive
Add a photo to this gallery
﻿
Retrieved from "https://thecharmedcomics.fandom.com/wiki/Kyle_Brody?oldid=13248"
Community content is available under CC-BY-SA unless otherwise noted.