Hogan was a low level warlock who had the ability to manipulate the minds of others with his discord power. He teamed up with Neena to bring back the Source and along the way, he gained powers from innocents he killed.﻿

When Neena and Hogan were first introduced in Charmed Lives, it seemed like Hogan was basically in charge with Neena subtly keeping his temper in check. They entered Luscious, a night club where there were intercepted by an Angel of Destiny.

No Rest for the WiccaEdit

In Innocents Lost, the duo went to the area where the hollow is to get some soil for a potion Neena is working on. Though, Hogan still seemed to be taking the lead, it was becoming clear that Neena was prodding him behind the scenes. Since the previous issue, Hogan had gained the power to blink and a firework like power that resembled Brent's spark power. Most likely, he got that power when he killed Brent. The blinking power may have been acquired from killing someone else who had that power. There are no known innocents with that ability, but that doesn't mean there wasn't one. Blinking was a witch power, so he could have gotten it from a witch.

Neena started to take charge more, when in Mortal Enemies, she openly came up with the plan to have Hogan share his discord power with the Source. Hogan didn't like this plan, but went along with it anyway. As Neena became more and more preoccupied with her main course, Hogan became more and more annoyed and whiny. He wants to become the Source's right hand man.

The journey ends for Hogan in Unnatural Resources, when the Charmed Ones defeated the Source and Hogan gets a little too much on Neena's bad side. She wraps him up in thorns and uses him as a throne.

It is confirmed by Neena's new partner in crime, Rennek, that Neena had killed Hogan and also that she considered him only a tool, not a partner as Hogan believed they were. 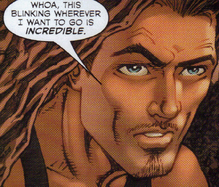 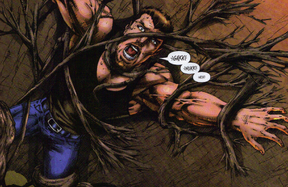 Unnatural Resources
Add a photo to this gallery
﻿
Retrieved from "https://thecharmedcomics.fandom.com/wiki/Hogan?oldid=8614"
Community content is available under CC-BY-SA unless otherwise noted.