The Hollow is a powerful and unstable thing, so good and evil decided that they must keep the other side from using it. Each side sent their own guardian. Good sent an angel and evil sent a demon. The original guardians were replaced, At least one of them after the Source killed the angel, and, probably, again after both the Jenkins and the Halliwells managed to steal it.

"Thirty five hundred years ago, The Hollow was unleashed on the world. The Hollow is a force that has the power to consume all magical powers, good or evil and is impossible to destroy.

"While roaming the earth, The Hollow nearly decimated all magic. Good and Evil had to join forces and combine their strongest magic to contain it. It was placed in an ancient crypt and is guarded by a representative from both sides, an Angel and a Devil, for all eternity."

Despite Grams, Patty, and Piper's belief that what they did destroyed the Hollow, it's clearly still there or else no one would be guarding it. New guardians have been assigned and they intend to be vigilent. When fireworks appear in the sky, they decide to investigate, leaving the Hallow gate unguarded. This allows Neena and Hogan to get what they want, dirt from The Ancient Burial Ground.﻿ 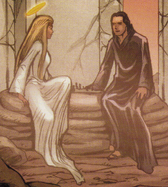 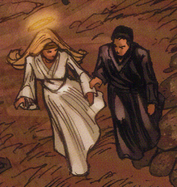 Innocents Lost
Add a photo to this gallery

Retrieved from "https://thecharmedcomics.fandom.com/wiki/Guardians_of_the_Hollow?oldid=13588"
Community content is available under CC-BY-SA unless otherwise noted.