Darryl Morris is a former San Francisco police officer and a friend of the Charmed Ones and their families.

Darryl worked with his partner, Andy Trudeau, to solve crimes. He was unknowingly brought into the world of magic when they were investigating a case where single women who lived alone where being killed with a cerimonial knive. Andy insisted they were witches being killed with an atheme.

Shortly before Andy was killed in the home of his on-again, off-again girlfriend, Prue Halliwell, he made Darryl promise to look out for Prue and her sisters if anything happened to him. He also told him that Prue was connected to all their unsolved cases. What he didn't do was explain why she was connected to those cases. Darryl was pulled into the world of magic as he fulfilled his promise to look out for them and beyond as he befriended their girls and grew close to them, allowing them not only into his life, but that of his family.

Things went well until Darryl he was framed for murder after helping the girls and almost executed for it. Then, he was pulled into the investigation of Inspector Sheridan, an investigation that cost her life and nearly many more lives. By that point Sheila had put him in the position to chose between the girls and his family and of course he chose his family, moving across the country to work with the police somewhere on the east coast.

The former San Francisco inspector is now on the East coast with his family. While the innocents were in danger, he was being watched by Billie Jenkins.

Just when the sisters think they have run out of options Paige sees that one of the warring sides is on their side and lead by none other than Darryl. He is not one bit surprised to see them in the thick of things.

Darryl is in the think of things. The fact that he already knew about magic before he got any probably gave him an advantage over people who were just learning about magic and also helped him know a little bit about how not to abuse it. He's in charge of government magic squads and has moved his base of opporations to San Francisco in order to work with the sisters to fix this problem and turn things back to normal.

Darryl fights side by side with the sisters, but although he is very proficiant at this, he is more than ready for it to be over so he can go home to his wife and sons. When the battle is over, Paige orbs him home without giving him a chance to say goodbye.

Darryl is doing dishes when he hears someone at the door. Since no one else is around to get the door, he goes and gets it himself and finds an unfamiliar woman at the door who claims to be a friend of sorts of the Charmed Ones. He tells her that he's not involved with magic anymore and and she tells him that she has a message for him and as he tries to close the door, she says something that stops him in his tracks. Tears start falling down his face until the messenger agrees to help Darryl see the person who is talking to him and for the first time in a decade Darryl gets to see his former partner standing their in front of him, a ghost to be sure, but there all the same. Andy's back. 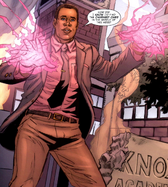 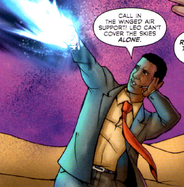 The Power of 300
Add a photo to this gallery
Retrieved from "https://thecharmedcomics.fandom.com/wiki/Darryl_Morris?oldid=13530"
Community content is available under CC-BY-SA unless otherwise noted.