This is a place for all those characters who were mentioned in the comics, but as have not been seen. Of course, if they do show up, they get moved, but for now, here they are.

The non-magical kind like Darryl Morris, are among the most frequent in this group, but magical ones belong here too if they are human.

She survived the Woogy, but missing, presumed dead does not look good for her.

Billie's older sister who she was forced to kill when Christy turned on her. While talking to Cole, Prue told him that "that blonde and her sister" shouldn't have been able to be evenly matched with the Charmed Ones.

Dr. Phil is an advice show hosted by Phil McGraw. One of Phoebe's fans wishing her to marry them to their love, said that they liked Phoebe more then Dr. Phil.

Marcy might have been annoying, but she didn't deserve to die.

Brittany Reynolds boyfriend was never seen, but he did call Piper and Phoebe to let them know about Brittany's death.

Since the nonmagical got magical abilities he sees random glimpses of the future, but "not even lottery numbers. Completely useless!" He is married to Mrs. Javitz and they have grandchildren.

He survived the succubus, but he was killed, most likely by Hogan.

When Cole arrived Prue thought her date was the one on the other side of the door. Later she learned that Cole did something not permanent to her date in order to keep him from interrupting Cole's chance to talk to her.

Tyler Michaels' parents. Since it is unknown if these are adopted parents or foster parents, it is unknown if they have the last name of Michaels or not. After Tyler pretty much burned their house down, Piper and Paige invited them to move into the Halliwell Manor until they could find a place to stay. This gave them the idea to bring other innocents under their roofs.

Demon with Half a FaceEdit

When Brittany Reynolds, an innocent the Charmed Ones saved from Javna, died and then aged, Piper and Phoebe suspected that maybe another similar demon attacked Brittany. The page about Javna is seen when they are trying to research this idea, but Javna is not ever actually seen.

"The Triad is a collective of powerful upper-level demons. Virtual Emperors of the Underworld, when together, the powers of this evil cabal increase exponentially and there is no known method of vanquishing them. Though unconfirmed, rumors persist of splinter groups seeking to carry out their own agendas." 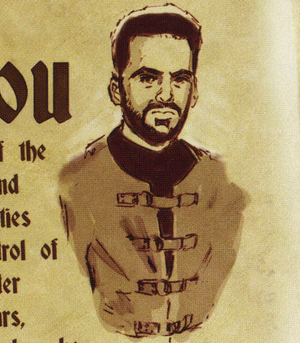 Though there is a picture with Zankou's entry in The Sourcebook, he has not appeared in the series other than a mention in Charmed Lives, therefore, he belongs here.

"One of the most powerful Demons of the Underworld, Zankou is a threat to all that is good and feared even by his own kind. So great were his abilities and ambitions, he once contested The Source for control of the Underworld and was banished as punishment. After teaming with the Charmed Ones to defeat the Avatars, Zankou continued his evil ways and was vanquished when he united with the Spiritual Nexus located under the Halliwell Manor."

The Charmed Ones were glad he wasn't around, but teenage witches still aren't fun to deal with. After Paige finished complaining about teenager witches, and Phoebe told her just wait until the twins came into their powers, Piper commented that, "Yeah, but I'll still﻿ take this grief over fighting Zankou any day".

Finn was a golem who Paige met and befriended. He was destroyed by his creator. When discussing the Source's new look, Paige commented that the last golem they dealt with (Finn) was "way hotter".

Neena and her Beloved had a pair of twins while with the all. Their daughter was the mother of all witches while their son was the father of all warlocks.

"Avatars are neither good nor evil. They possess immense power and exist outside time and space. The Avatars viewed the constant battle between good and evil as pointless and enlisted Leo to convince The Charmed Ones to assist them in creating a perfect world. When the price for that perfect world proved too high, The Charmed Ones allied with the demon Zankou to undo the false paradise they had helped create."

Tyler protested that Harry Potter didn't make the older children leave Hogwarts when it was time for the battle to begin.

Prue asks Cole when he turned into Jiminy Cricket to which he replied when he became the mayor of Deadtown.

Retrieved from "https://thecharmedcomics.fandom.com/wiki/Characters_Mentioned_But_Not_Seen?oldid=13539"
Community content is available under CC-BY-SA unless otherwise noted.