Brittany Reynolds was a friend of the first Charmed Ones and thest innocent that Prue, Piper, and Phoebe saved together.

The demon Javna tried to suck the youth out of Brittany. Though he succeeded in stealing her youth when Brittany convinced the sisters that she really was Brittany, they were able to find a way to save her.

No Rest for the WiccaEdit

Approximately nine years a﻿fter the sisters first helped Brittany, Piper and Phoebe are called by Max, who was Brittany's boyfriend in 1998, to let them know that she'd died. The two sisters leave their kids with Leo and go to her funeral. Everything is going normally, until Phoebe touches Brittany's coffin and sees that inside, Brittany isn't as young as she should be. She tells Piper what she saw and Piper freezes the scene in front of them, right down to the raindrops. She opens the coffin and, much to her dismay, confirms what Phoebe's vision showed her.

When back home, they learn that sometimes when someone who has been touched by evil dies, they revert to how they looked when they were attacked. Brittany's death is only the first of many to come.

When Hogan is starting to get on Neena's nerves and comments on the fact that Neena couldn't dirty her hands with killing innocents, Neena informs him that he didn't have to kill the innocents. This probably includes Brittany, so most likely, although she is never mentioned by name, Hogan killed her. 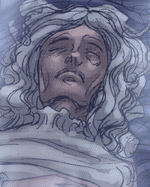 No Rest for the Wicca - Phoebe's Premonition 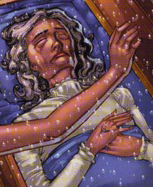 No Rest for the Wicca
Add a photo to this gallery
﻿
Retrieved from "https://thecharmedcomics.fandom.com/wiki/Brittany_Reynolds?oldid=9979"
Community content is available under CC-BY-SA unless otherwise noted.