Angels of Destiny are in charge of protecting destiny, but some things are out of their hands.

The first time an Angel of Destiny showed up, he offered Piper, Phoebe, and Paige the chance to give up their powers. He also gave them a taste of life without their powers, when a witch hunter tried to trick them into helping him hunt down a witch.

The second time an Angel of Destiny showed up, she was there to take Leo away. Piper had desperately called her, rather than let the Angel of Death take him from her. The same Angel returned Leo after the battle against Billie Jenkins and her sister, Christy, and later married Phoebe and Coop.

"Magical being that possess the knowledge of all things. They serve as keepers of the Grand Design and bear the responsibility of maintaining that the future plays out as it is destined."

A third Angel of Destiny confronted Neena and Hogan telling them that the Charmed Ones had already completed their destiny and that they should interfere. Neena opened up a portal and banished her. She told Hogan she didn't know where she sent her, but she hoped it was somewhere nasty.

When Piper ended up with the banished Angel, the Angel stuck around long enough to explain who Neena was and what little she knew of what Neena was up to. She got Piper to give her the illusionary apple that turned out to be the ticket out of there. She did apologize just before she took a bite and vanished.

After the battle was over, all three Angels of Destiny showed up to give judgement on Neena. They banished her to the failed paradise she created trying to replace the place she and her mate were with the All﻿. But since they understood the reasoning behind her actions, they also allowed her mate to join her six months of every year.

Before they were done with Neena, they addressed what the elders did to Melinda and told the Charmed Ones that they were absolving the children, all of them, of any potential calling, to allow them to grow up without worrying about prophecies or Cleaners or Elders. 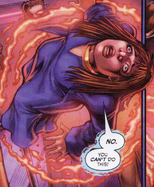 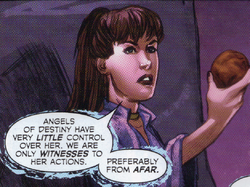 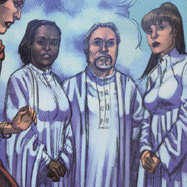 The Charmed Offensive
Add a photo to this gallery
Retrieved from "https://thecharmedcomics.fandom.com/wiki/Angels_of_Destiny?oldid=13589"
Community content is available under CC-BY-SA unless otherwise noted.